Danielle Warby presented the following talk at ‘Queer Thinking: Out in Sport’ as part of the 2014 Sydney Gay and Lesbian Mardi Gras  festival.

I’m sure you’ve all seen the news over this last week about Michael Sam in the USA.

For those of you that missed it, he’s a college gridiron player looking to get picked up in the NFL draft. So, not yet a professional athlete but if he’s selected, and it seems likely, he’ll be the first openly gay man in the league. This is quite a big deal and the media has reacted accordingly.

What some of you may not know is, on the same day, the captain of the England football team also came out. But I’ll bet very few of you heard about that.  And why not? Here’s a clue: 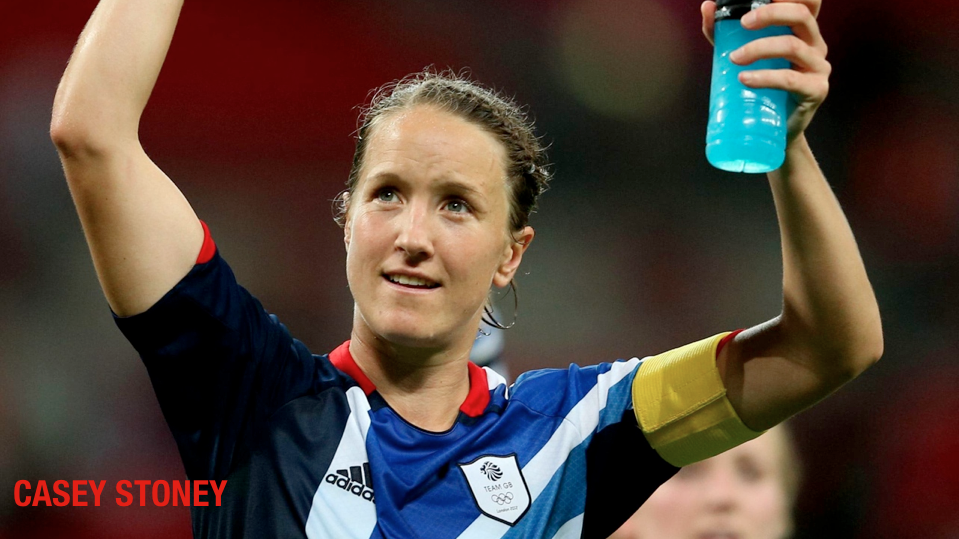 Or, if you’d like a similar American example to Michael Sam, here’s another from the USA, Brittney Griner, the #1 draft pick in the WNBA last season. 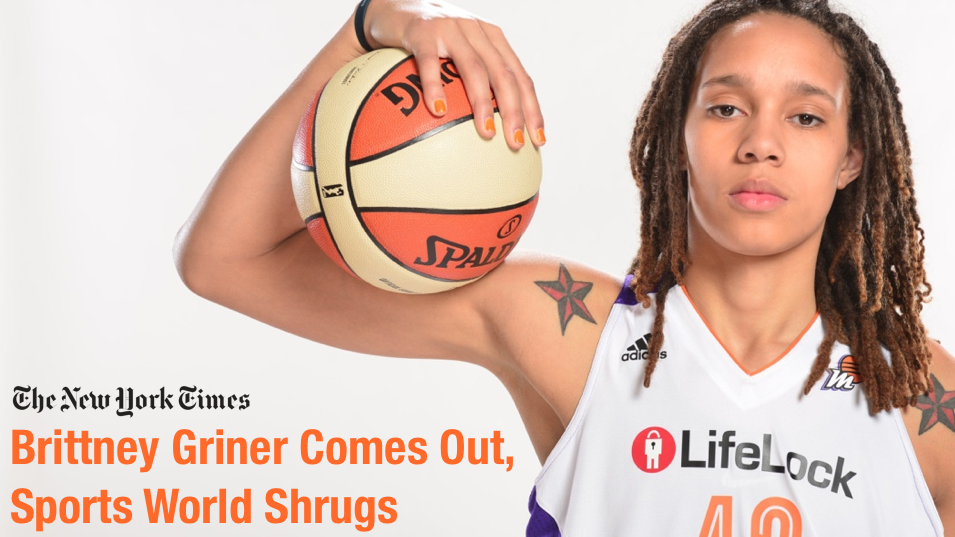 Some of you may be asking yourselves… what’s the big deal? Aren’t all sportswomen lesbians anyway?!

So I going to talk about:

We all know know those stereotypes are rubbish but there’s this idea within the anti homophobia in sport movement and with the media, that it’s only going to REALLY matter when a professional male athlete in a team sport comes out. Something to do with locker rooms, I dunno. But this is damaging to both men and women, gay or straight.

It feeds into the idea that sport is a masculine pursuit, that gay men are some how less than masculine, less manly, and that well, all women that play sport must be mannish lesbians.

And it denies the experiences of all the other gay men and women in sport that fall outside of this narrow idea that we’re all waiting for some mythological ‘gay messiah’.

While I really respect the work the Sydney Convicts and the Bingham Cup are doing, this ‘look how manly we are even though we are gay men’ rhetoric does nothing to challenge these stereotypes. It’s very close to the ‘women can play sport and still be attractive’ storyline that I’m also not a fan of.

Tackling homophobia in sport requires us all to equally tackle sexism in sport. I’d like you to all have a think about the perception that you may have that women’s sport it somehow less worthy of your attention.

Now, there ARE lesbians in sport, obviously, we’re everywhere, so I’m going to look a little at how these stereotypes are damaging to the cause and to individuals.

This from an athlete who plays basketball for Australia and for the Canberra Capitals.

Then there is the stigma that all female athletes are or ‘get turned’ into lesbians anyway. It frustrates me that being someone who was in a heterosexual relationship for most of my life I am giving this stigma validity in the minds of the ignorant people who believe it.

The media coverage (or lack there of) given to women’s sport encourages gender stereotypes and heteronormativity. Sportswomen are forced to come out over and over again because the media ‘forgets’ they already have and there’s this weird dichotomy between “all sportswomen are lesbians” and the assumption by the interviewer that the actual sportswoman they’re speaking to is straight. This is not the case for ALL media, just the vast majority.

This is something the sports themselves encourage. 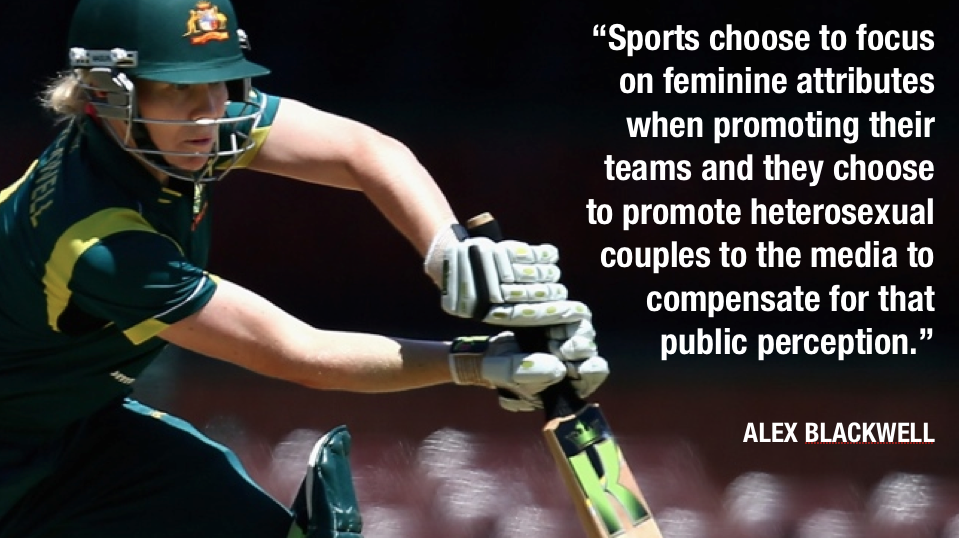 So, as you can see, there’s being out but there’s still a long way to go with regards to visibility.

Not all coming outs are the media managed, PR driven, global revelations with reactions and counter reactions that we saw with Michael Sam. But we seem to think they have to be.

I spoke to a bunch of sportswomen in preparation for this talk, some out, some not and the variety of responses I got suggests to me we need to rethink what coming out looks like.

First up is Michelle Heyman. She plays football for the Matildas and for Canberra United. She’s never spoken to media about her sexuality yet when I asked her why she hasn’t come out, her reply was: 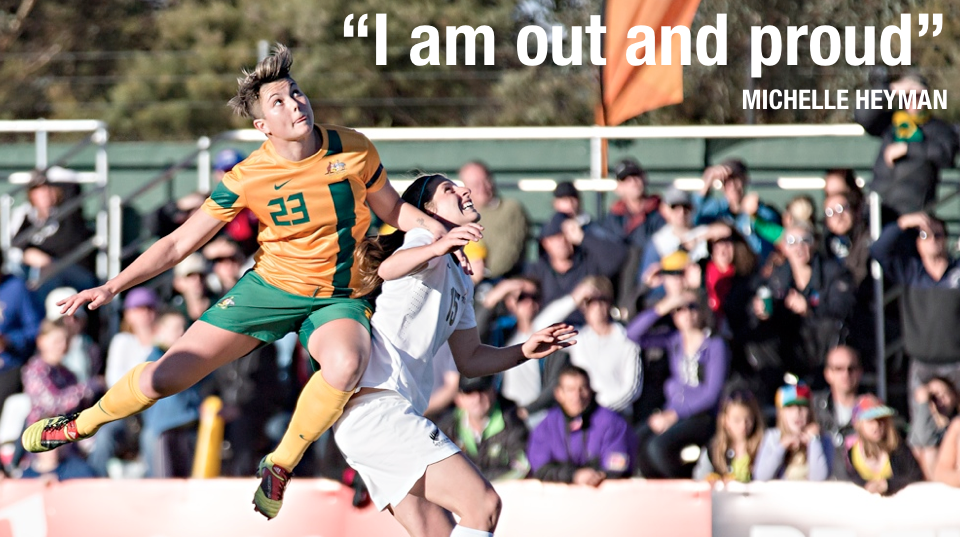 And that’s the thing, she is. You only have to look at her instagram. It’s there if you know what to look for.

This is what coming out can look like to a lot of the young athletes today. She doesn’t fit in to the current narrative of triumph over adversity. There was no big revelation, no shame spiral. Doesn’t mean we should not applaud them as positive role models.

It’s a non issue for Michelle, for her team mates. It’s a non story. But isn’t this the place we’re trying to get to? Shouldn’t we be celebrating the fact there are some environments where sexuality is a non-issue?

Because the world needs to see this. It isn’t like this for everyone.

I spoke to another athlete who asked not to be named. She’s the same age as Michelle, 25, and also represents Australia in her chosen sport.

There are a few areas in my life that I know are not accepting of gay people. Some are work related, others to do with family members being unaware. I know I would lose some job opportunities. I guess it’s an unknown area as there are not many out athletes in my sport in Australia.

The sad truth here is though, I know and she knows, there are other lesbians out there, but the lack of visibility is something that affects her decision to come out and affects the people around her. They don’t get to see other successful, out, female athletes.

Everyone [in my sport] is very supportive and accepting. Obviously we are all there to do a job and personal lives stay out of the sport but it is no secret and never has been.

So what I’m seeing, anecdotally in team sports at least, most athletes are out to the team, coaching staff and even members of the media they know on a personal level, but it isn’t public either by personal choice of the athlete, or, like in Michelle’s case, no one asked even though, as she says, she’s out and proud.

So what do we want it to look like?  If you want to get it to a point where we ‘shrug’ when a male athlete comes out, you need to help dispel sexism and the idea that everyone has to conform to gender stereotypes in sport. Celebrating our female athletes both straight and gay will go a long way to doing that.

We need to change the rhetoric and stop ignoring the fact there are pockets of utopia all around the world. And some of those places are right here. 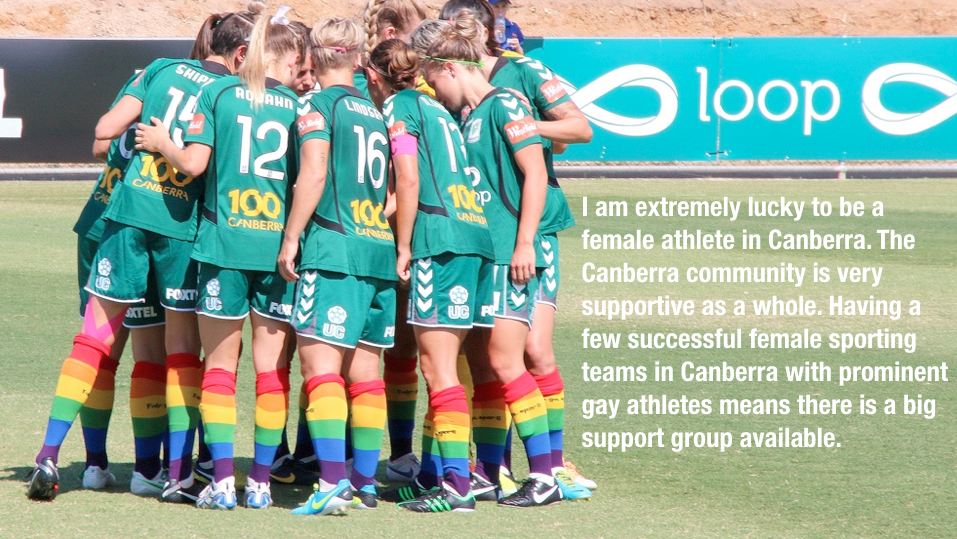 I want to finish by introducing you to some of our out Aussie sportswomen who are currently competing. This is by no means an exhaustive list but just the athletes who have spoken to the media or given me the OK to mention them in my talk today.

When male athletes come out, there’s a fanfair of congratulations in the mainstream media and on social media. Female athletes don’t get this as much… so I want you to all go away today and congratulate these women for their bravery in living their lives out and proud. 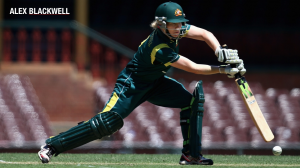 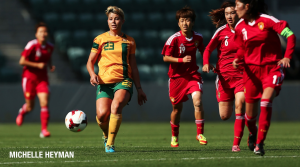 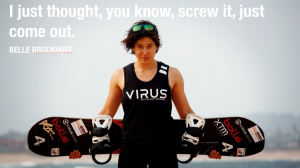 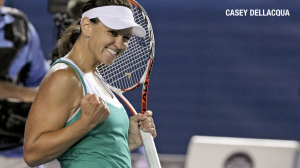 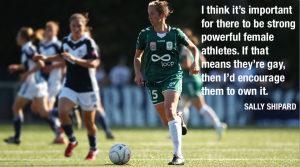 Danielle Warby had a chat with Belle Brockhoff about coming out on national television, being a gay athlete in Russia at the Sochi Olympics and her crush on Mila Kunis.